This blues rock lick builds on the concepts of my blues lick lesson 01 and lesson 02 on my channel . Also, you’ll find a full blues rock solo with this lick in bar 14 AND a backing track to practice it on. Everything is connected here on the Guitar Inspiration channel, so subscribe to stay updated!

This electric blues lick is heavily inspired by Texas Blues and the guitar solo and licks that Kenny Wayne Shepherd played on his 1998 hit song ‘Blue On Black‘. This lick starts with a pickup of 3 sixteenth notes, the first being a full tone bend on the 12th fret of the G-string. Usually, I play this bend with 3 fingers, but in fast licks like this one, I only use my middle finger. Don’t worry if it’s not a full tone exactly. A 3/4-bend is fine too.

Next, bar the 10th frets of the B and E-string with your index finger. Pick the first one with a downstroke and the second one with an upstroke. This upstroke is essential because it changes your picking direction.

In the next bar, bend the 13th fret of the B-string a full tone up. This is a long note, so you can band and hold the string with three fingers. Pick vigorously with a downstroke. Personally, I like to add the sound of the muted D and G-string for effect.

The next bend resembles the one we started with, and it boomerangs the lick back up to the 10th fret on the B-string and the E-string. The picking pattern is the same, but the rhythm differs because we’re playing sextuplets. Adding this boomerang technique to your blues and rock guitar licks is a real superpower. Using this concept, you can repeat these licks for as long as you like!

After a similar descent, with a pull-off from the 13th to the 10th fret on the B-string, play the 13th fret on the G-string with a downstroke. This is the blue note.

Finally, do a hammer-on from the 10th to the 12th fret on the G-string. I like to land on a downstroke here.

Practice this blues lick with a metronome or on the backing track (that is not quantized by the way!). Cheers, Maarten.

In this blues guitar lesson , I demonstrate a cool technique that can make your blues licks more interesting.

How To Make Your Blues Licks More Interesting

In the image below, you can see a preview of this blues technique. The first staff shows a basic blues lick (in E) without the micro pull-off, while the second staff shows the technique added. 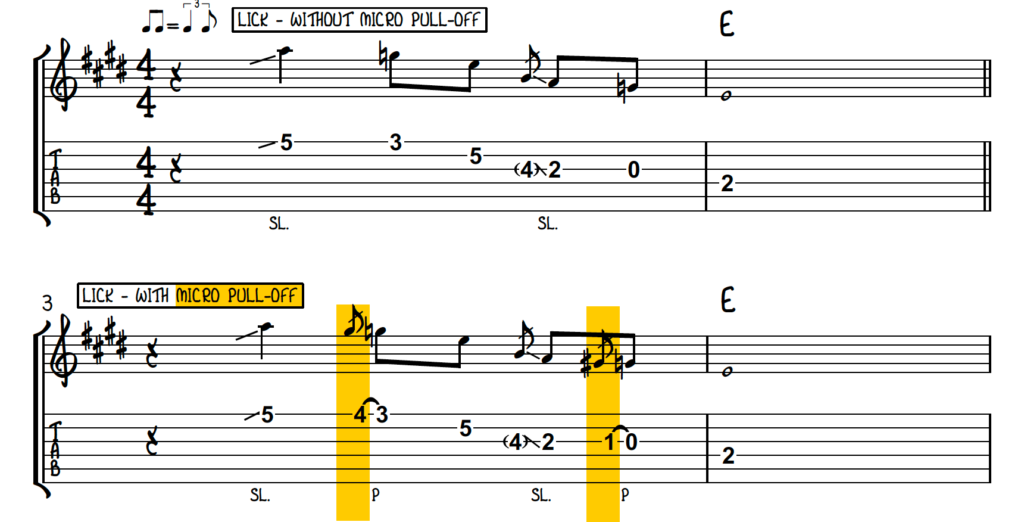 What do you think? I am very fond of this small concept, as it helps to make blues licks more interesting. You can practice this technique on a blues backing track in E here.

For the first time, I added a yellow square that acts as a progress bar, so you can see where I’m located on the notation. I like to result, so I’ll use it in future videos (not only blues lick lessons).

In this video, I explore the A minor blues scale a bit higher up the guitar neck. Topics include picking technique, the use of the blue note, B.B. King influence and the use of Fuzz.

For reference: download a full chart of the A minor blues scale here:

The Next Blues Lick Lesson Here:

Just a quick rock jingle in G, with a clear call & response pattern 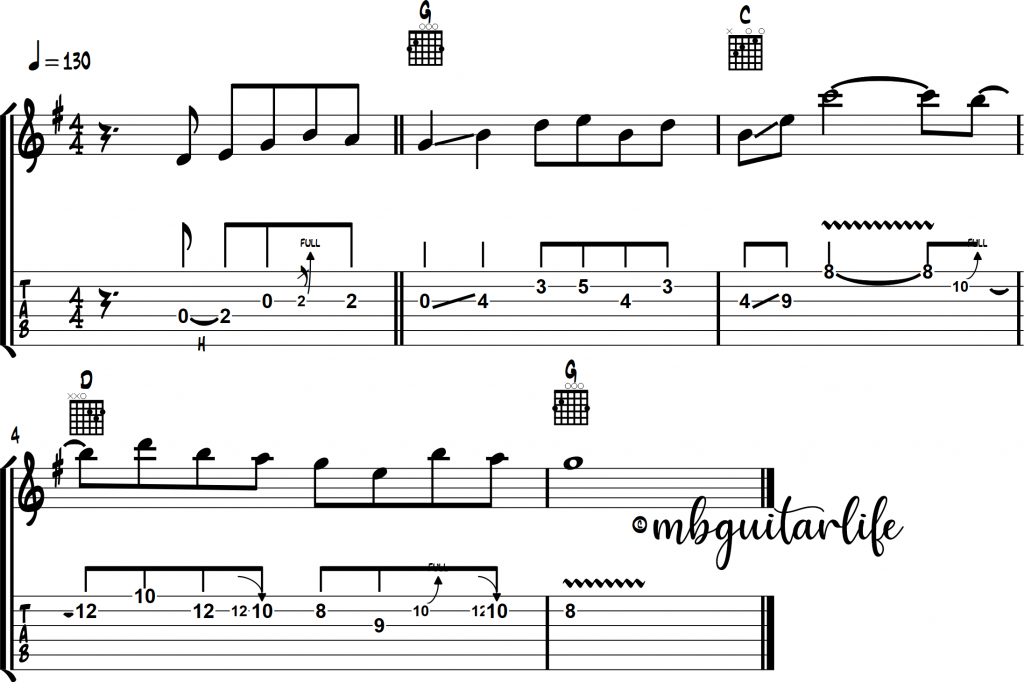